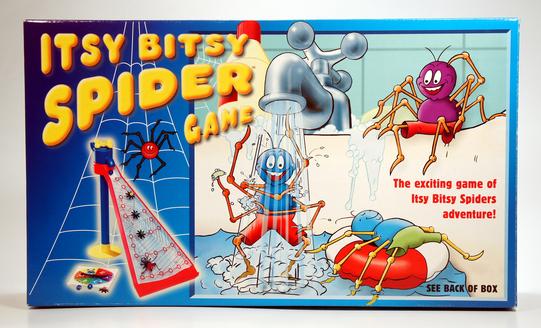 ​Itsy Bitsy Spider (2002)   Itsy Bitsy Spider, based on the children’s song, came from an idea by Bill Van Orden. The game has holes in a clear plastic outer layer that acts as the game playing surface. Underneath is another layer where the water balls travel down the maze-like incline. At the top of the diagonal, pie-shaped game unit is a water tap.  The balls are released one at a time as the water tap is turned. The balls travel down and hit the underside of the playing pieces (little spiders) that fly off the game board to be reentered again starting at the bottom. The first player to get his/her spider up to the water spout, is the winner.